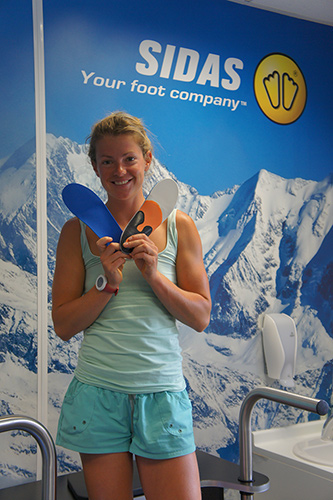 Although Marie’s natural ability is striking, it is her list of achievements that draws attention. In 2016, Marie finished second in the overall ranking of the biathlon world cup, just a few months after the birth of her daughter. The French athlete marked a turning point at the Oslo world championships: six medals in six events, including three global titles. She was crowned world champion in mass start, a spectacular “confrontation” event. An achievement that few French sports people have been lucky enough to have.

Regarded as the “Martin Fourcade” of women’s biathlon because of her achievements, her team mates appreciate her perfectionism, but also her ability to not take herself seriously.

A biathlete with various projects

Born in Lyon, Marie started biathlon at the age of 15 after moving to the mountains in search of fresh air. Alongside her sports practice, Marie continued her studies first in Vercors while she studied for her Bac S (scientific baccalaureate diploma) in a sports academy, and later she graduated with a biology degree in Grenoble. Moreover, she naturally completed her studies with a Masters degree in biology, ecology and environment so that she could follow her passion in her preferred area. Maybe you will come across her in a natural reserve trying to save the well-being of the planet...

René Char is one of her favourite poets “Plan as a primitive, act as a strategist.”
“Ain’t no Sunshine” sung by Freddie King is her favourite song
Marie regularly shares her stories about her training and her mountain activities with humour and lightheartedness